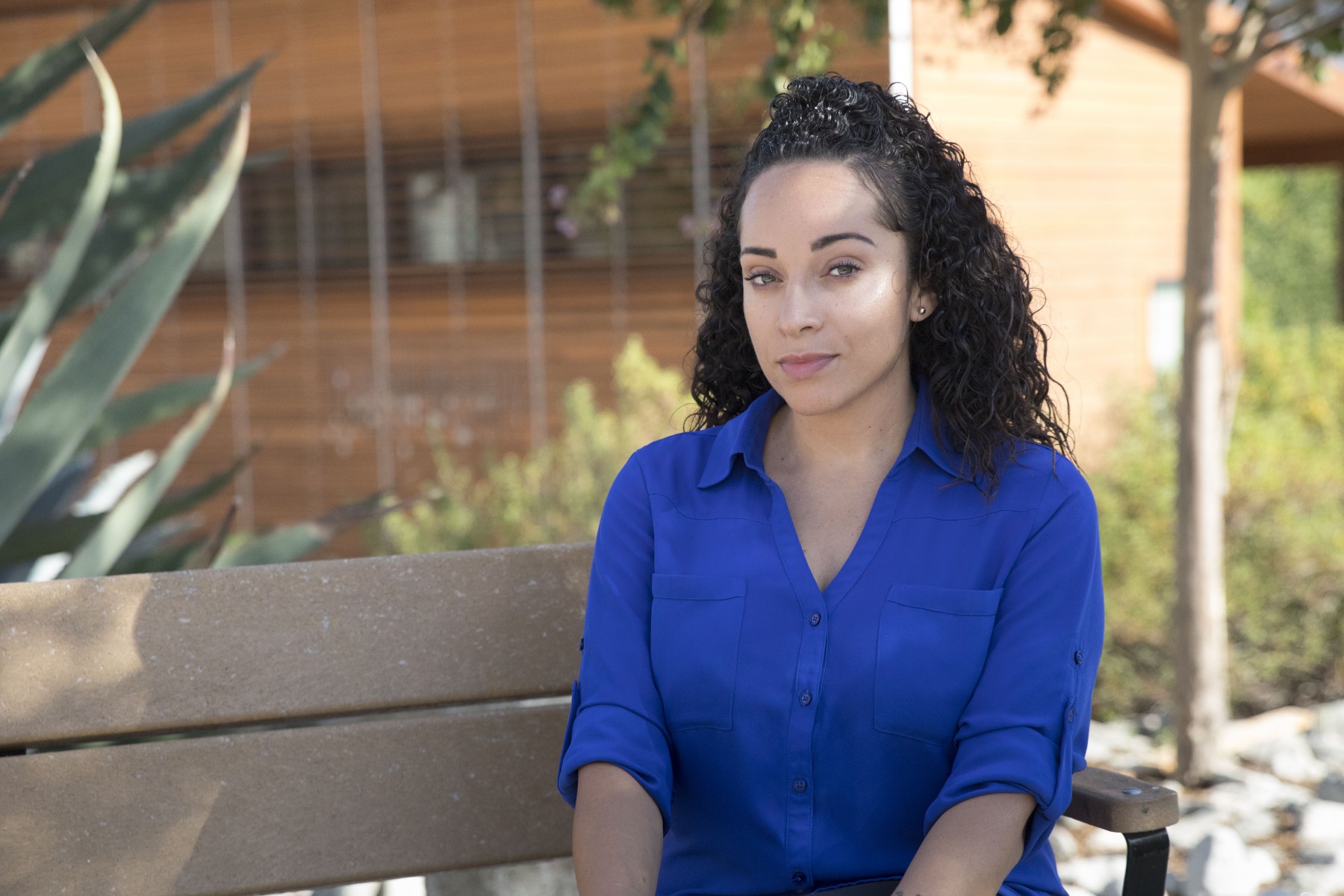 Every Sept. 11, Priscilla Rodriguez’s fellow Marines would share stories about where they were on the morning of the terrorist attacks that killed nearly 3,000 people and injured more than 6,000 in 2001.

For many, that meant where they were stationed at the time. For Rodriguez, who was 14 years old when the 9/11 attacks occurred, the tragedy hit much closer.

“It took a long time for things to feel normal again after 9/11. And normal changed,” said Rodriguez, a communications and outreach specialist for Cal State San Marcos’ Veterans Services.

A New York native, Rodriguez was in class on Sept. 11, 2001 at the all-girls Catholic school she attended in the Bronx, about 15 miles from the World Trade Center.

This was before the proliferation of cellphones and news alerts at your fingertips. Rodriguez only knew something was amiss when, instead of the usual morning announcements and prayers, a voice on the loudspeakers directed students whose parents worked in Manhattan to go to the cafeteria.

Cafeteria workers had TVs on, and it was then that Rodriguez and her classmates saw that one of the towers at the World Trade Center was on fire. Then they saw the footage of an airplane hitting the tower.

“It didn’t even really sink in what was happening until we watched the second plane hit,” Rodriguez said. “And then they turned the TVs off.”

Students used landlines to try to contact their parents. Rodriguez couldn’t get through to her mother, continually getting a busy signal. She finally tried calling her grandmother. One of her cousins answered and said Rodriguez’s mom had called to say she was OK, and that Rodriguez should go pick up her younger sister from elementary school.

Rodriguez lived in the Bronx directly uptown from Manhattan and saw the plumes of smoke as she and her sister walked down the street toward her grandmother’s house. On an otherwise clear day, it looked like there was a dark cloud rising over Manhattan.

Rodriguez still didn’t know the extent of the attacks when she walked into her grandmother’s house. When her grandmother said, “They’re gone,” Rodriguez had no idea what she meant.

“The towers,” her grandmother said. “The towers are gone.”

“As she’s telling me, I’m looking at the TV and it’s just on replay, all the footage of the towers coming down,” Rodriguez said. “I just remember the paralyzing fear of ‘What just happened?’ That’s when she explained that it was a deliberate attack. She told me about the Pentagon and the other plane that went down in Pennsylvania. At 14 years old, there’s no precedent for that. The only way you can describe that is a fear of the unknown. We have no idea what’s happening in our country. Nothing feels safe at that point.”

A few hours after Rodriguez and her sister arrived, their mother finally walked in the door. The normal 35-minute commute from downtown Manhattan took nearly five hours with limited mass transit available.

“I just remember the relief when I saw her because, even at 14 years old, I understood that there were thousands of people who weren’t coming home to their kids,” Rodriguez said. “I remember walking home from my grandmother’s house and it was dead silence throughout the whole community. You could hear a pin drop the whole way home. What is normally the busiest city in this country was at a complete and utter standstill. It was like ‘The Twilight Zone.’

“My sister and I fell asleep with my mom that night watching the news. It was the first time where I didn’t feel safe. Part of my childhood was taken in that moment. I went to sleep worried for the first time in my life because I didn’t understand what was happening. In the days after, there was just the weight of this fog over the city of lifelessness.”

Each fall, CSUSM’s Veterans Services offers a Vet Net Ally workshop for faculty and staff to educate members of the University community about the needs and concerns of military service members and student veterans.

Members of Veterans Services share a little bit about themselves during the seminar, including their reasons for joining the military. Rodriguez tells attendees about growing up in New York. About the deep burning feeling she felt after 9/11. About the inability at age 14 to articulate or understand what that feeling meant. About how she experienced that sensation again three years later.

Rodriguez was glued to the TV when the Iraq war began in 2003. With a goal of becoming a history teacher, she was fascinated by what was occurring in the Middle East.

A year later, Rodriguez reconnected with one of her older cousins, Gene Juan, whom she hadn’t seen in more than a decade. She learned that he was in the Marines and had been in Iraq during the first year of the war.

Juan was stationed at Camp Pendleton, and Rodriguez’s mother sent her to the West Coast to ensure that her daughter would see Juan before he deployed again. At the end of a week-long visit, Juan asked his younger cousin what she was going to do next, with high school graduation just a few months away. She didn’t hesitate.

“Here I was three years later, 17 years old, when I recognized that the burning feeling that I felt when I was 14, watching the news and watching my city at a standstill, was patriotism,” Rodriguez said. “I was angry for my city, I was angry for my country. I was hurting and I was confused, but I knew something had to be done about it. He left on Dec. 5, and I enlisted on Dec. 28.”

Rodriguez served on active duty for eight years with an additional two years in the reserves. The transition from active duty to civilian life wasn’t easy, and she has embraced the opportunity in her role at CSUSM to help other military members make an easier transition.

Today, on the 17th anniversary of 9/11, Rodriguez will reflect on the morning that changed her life. How the dream of being a history teacher turned into a need to serve her country. Never before had she witnessed the country rallying like it did in the days and weeks following 9/11.

“Now, it breaks my heart to see the division in this country,” she said. “On so many levels, but especially because I remember those profound days on and after 9/11 and the way this country came together to support one another and to mourn and then heal. The fact that it’s so quickly been forgotten is disappointing.

“I hope we get back to what it was – and I hope it doesn’t take another national disaster to get us there.”