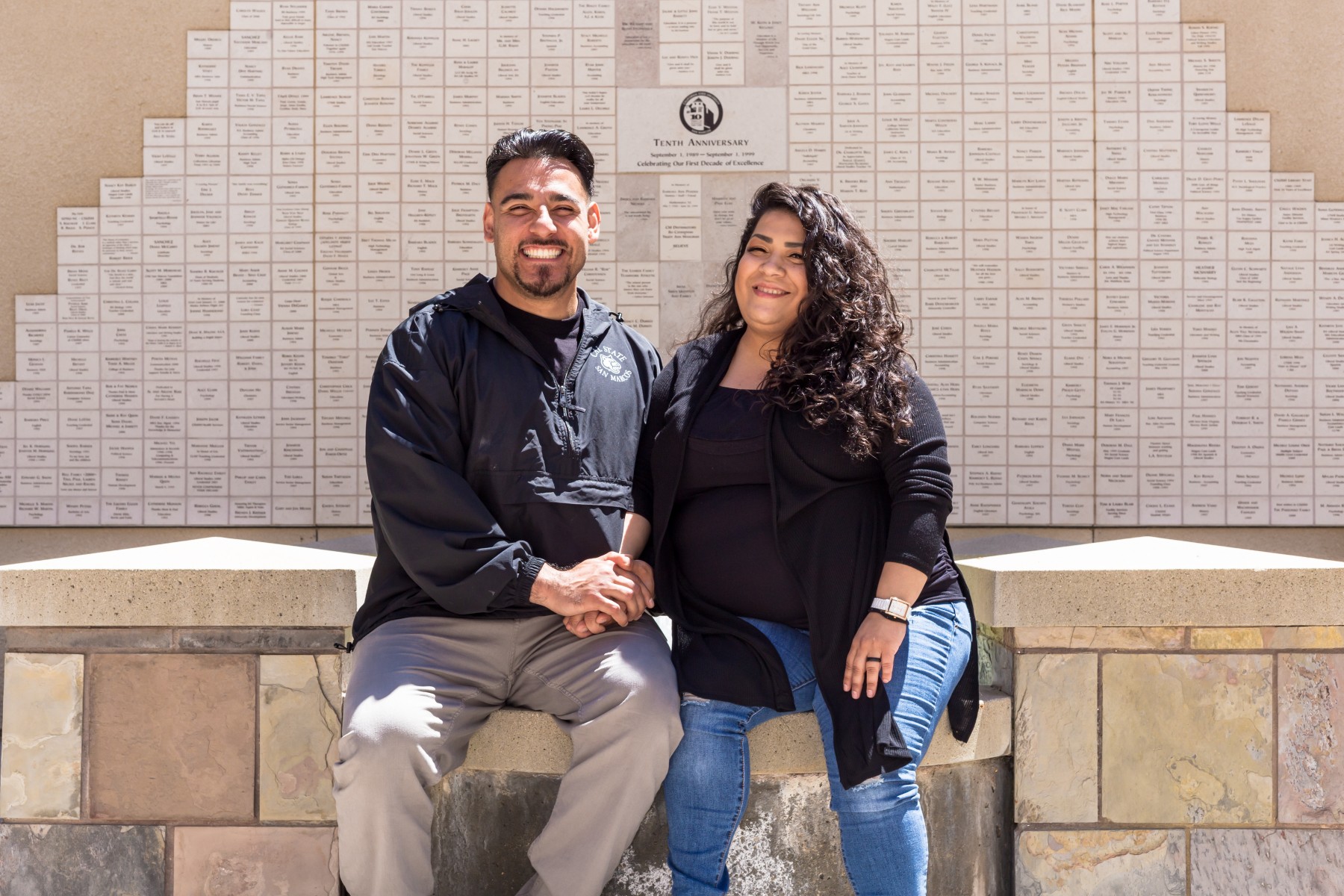 Joseph and Maria Robinson – A human development major, Joseph credits wife Maria for standing by him through his struggles. Photo by Steven Young

After all he overcame to reach CSUSM’s doorstep – a childhood spent bouncing around the foster care system, stints in jail, a prison sentence – the thought that a math requirement would be what kept him from his bachelor’s in human development was inconceivable.

“I pretty much quit,” Joseph said.

Fortunately, Joseph had already been in contact with ACE Scholars Services, CSUSM’s innovative program to support former foster youth, before he learned about the possibility of the math requirement derailing his transfer from San Diego City College.

With help from ACE counselor Leigh Quijada, Joseph received an exception that allowed him to transfer.

“If it wasn’t for Leigh and ACE, I wouldn’t have gotten in,” he said. “They really motivated me.”

Joseph will be among the nearly 3,800 CSUSM graduates who cross the commencement stage next month. Among those cheering for Joseph will be his wife, María, who never wavered in her support despite the seemingly endless challenges.

“I’ve told him a million times, I wouldn’t change anything because it’s built us into who we are today,” María said. “It’s molded us into people better than who we would have been.”

Joseph knows he overcame long odds to reach this point – less than 3 percent of former foster youth earn a four-year degree. His only childhood memory of his birth parents is talking to them via phone while they were in jail. Now 31, he met his birth mother when he was 19, but they haven’t talked in many years. He never had contact with his birth father, who Joseph said was deported to Mexico several years ago.

Joseph was placed in foster care as a toddler, and though he had several long-term families as a child, he always ended up back in the system. His teenage years were spent bouncing around different group homes. He was prone to running away. Stealing was often a matter of survival, and soon became a habit.

Just before his 18th birthday, Joseph was arrested for getting into a fight with two men who had threatened María. The charges against Joseph were dropped, but he had no guardian and there was no social worker present in court. It created a quandary for the judge, who couldn’t simply release a minor on his own recognizance. María’s mother agreed to take Joseph in, but that only solved one problem.

“When they released me, I had zero money, zero clothes, zero anything,” Joseph said. “My girlfriend’s family was poor, so I’m going into a home where they’re really struggling.

“I stole to make ends meet.”

Joseph typically stole a product from a retailer, returned it for store credit, and then sold the store credit. The scam didn’t last long – Joseph was arrested and spent three months in jail.

Joseph got a job at a fast-food restaurant after his release, but finances remained a struggle. It took three weeks before he received his first paycheck, a nominal amount that only covered his training. The second check came two weeks later and was for a little more than $100. Going five weeks with virtually no income, Joseph reverted to stealing.

It wasn’t long before he was arrested again. This time, he wrote a letter to the judge explaining his circumstances. At the suggestion of an acquaintance, he included a line about wanting to join the Marines. The last-second addition to the letter caught the judge’s attention. The judge said he couldn’t force Joseph to join the Marines, but he reduced the charges in hopes that Joseph would keep his word. 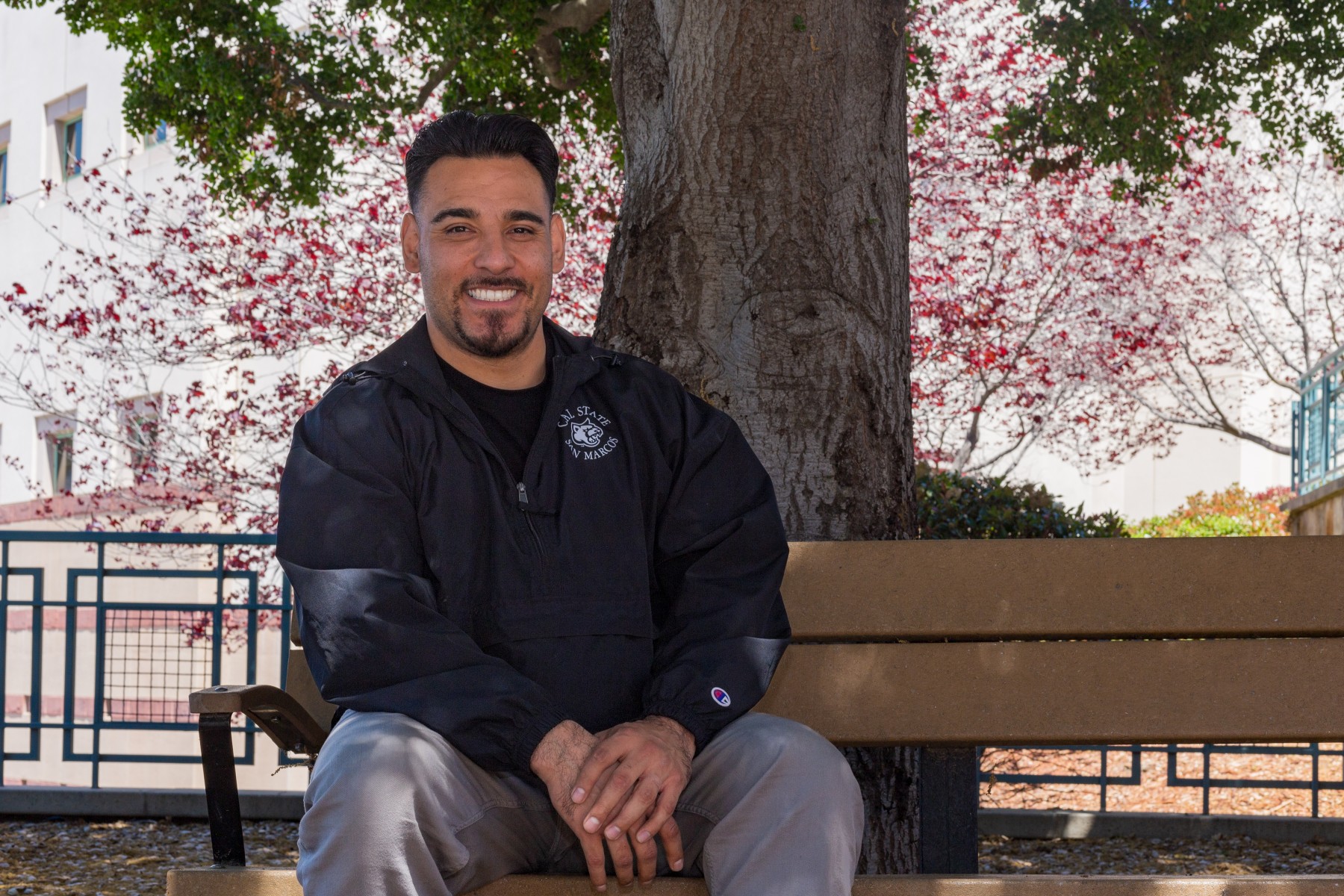 Joseph Robinson – A human development major, Joseph Robinson will become the first in his family to earn a college degree in May. Photo by Steven Young

Joseph joined the Marines expecting to make it a career. But, he says, “my personality was just a little too strong sometimes.” He completed his four-year commitment, but found himself in a familiar situation when he got out. He again resorted to stealing to help support himself, which led to a familiar conclusion – being arrested. There was one major difference. Instead of jail, Joseph was sent to prison.

Placement scores determine where someone is incarcerated, and Joseph’s previous arrests increased his placement score. He was sent to a Level 3 prison, which meant cell living alongside mostly violent offenders.

Going from jail to prison provided a much-needed wake-up call. Joseph served half of a three-year sentence. He vowed to end the cycle of arrests, not only for himself but for María. They married when he was 18 and she was 19, and she stood by him through arrests, incarceration and bouts of being homeless.

“She’s been that rock,” Joseph said. “I should have been the rock, but she was the rock. Now I’m the rock. I’m in a position where I’ve learned. I’m at that point where I can say, ‘This is the road that I need to take, and this is the path I’m going to take to get there.’ ”

Joseph worked numerous odd jobs after being released from prison. Most were day-labor jobs, which he despised.

On one of the jobs, a coworker boasted about money he received to attend San Diego City College. Joseph decided to give it shot. He enrolled in two classes, and financial aid covered all of his costs.

“I had my doubts,” Joseph said. “I never even graduated high school. I got my GED in jail. I thought, ‘Am I even going to be able to do this?’ This was something unheard of where I grew up.”

But Joseph thrived at City College. He was active in student government and even started a chess club. After three years, he had a 3.3 grade-point average, his associate degree and acceptance to CSUSM.

Joseph earned a 4.0 GPA in his first semester at CSUSM, and his overall mark is 3.86 as he approaches graduation. He plans to pursue a master’s, either in education with an emphasis in counseling from San Diego State or in social work from CSUSM. After gaining some work experience, he wants to return to school for his Ph.D. so he can help influence policy for children with upbringings similar to his own.

“What Joseph has achieved is remarkable,” Quijada said. “He is an exceptional student and has excelled in his academics. But what I find even more significant is his positive attitude throughout the challenges he has faced, his ability to advocate for himself, his intrinsic motivation and his passion for helping others.”

That includes helping María as she works toward a bachelor’s in Spanish at CSUSM. She said Joseph has been like her own private academic adviser, assisting with her class schedule to ensure she remains on track for graduation. When she visited an official university adviser recently, she learned that not only was she on the right track, but she would be able to graduate in December rather than spring 2020.

Joseph and María are both first-generation college students, and they already are seeing their success positively impact other members of their family. A 15-year-old nephew said he wants to follow in their footsteps and earn a degree.

“I try to stay humble and just be appreciative of how far I’ve come,” Joseph said. “It’s a good feeling knowing that I’m going to graduate.”